As the weather looked fairly decent this morning I made the decision to move the nuc hive out of my garden and transfer the bees into the 3' tbh. At 0745 the sock was stuffed into the entrance, the hive wrapped up in a dust sheet and placed in the van ready for their fifteen mile ride. 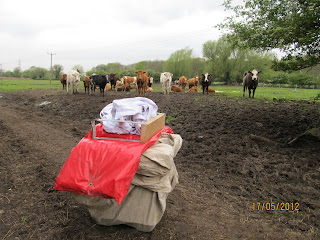 Due to the heavy rain lately the track is too muddy to drive down which meant a 300m walk with the hive and gear down to the boat. I'm not sure if the cows were interested in me or the bees, but I hoped there were no bulls eyeing up my red cylinder tank jacked!

The recent flood had receded but the flotsam had been dumped directly on top of my jetty. I decided to clamber over the top of it all with the hive rather than try to move it and become lathered in mud before I started with the bees. 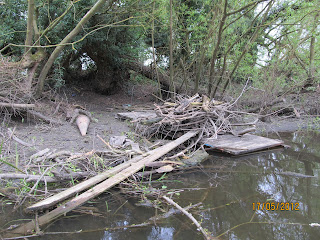 As I unwrapped the nuc hive and the unhappy bees made their escape I came across my first problem. Boyd's 17" top bars are about 20mm longer than my 17" top bars! I should have remembered this from when we did the split five weeks ago. Luckily I swapped onto the mark two tbh on which the lid fits a little more loosely :-) The process went quite well and the bees were in their new home within twenty minutes. 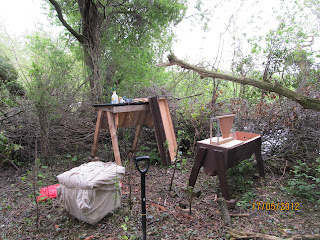 Here are some pictures of the comb. Any observations welcome! 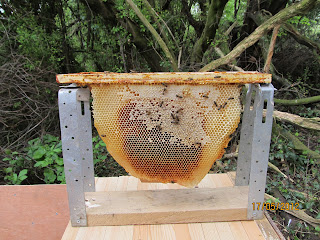 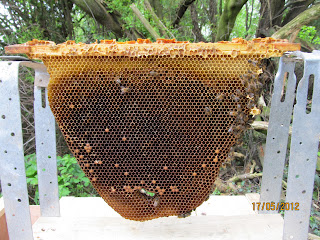 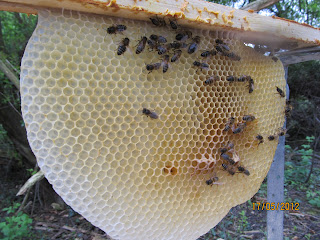 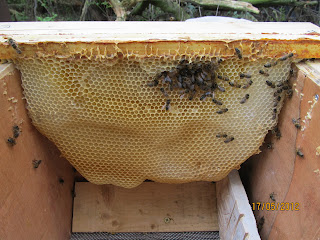 I left them for about three hours while I did some other jobs. Afterwards they seemed quite calm and a handfull were buzzing around. I don't think they had worked out where the entrance was yet. My only concern was that the actual number of bees in the colony didn't seem that big, probably only high hundreds. I'm not sure if there is a critical mass that's needed for the colony to survive?