How to Save The World and create a ‘nuc’.

This year my personal focus is on creating nucleus colonies to build up the number of local queens that I can then pass on to others later in the year. To do this I need to build up my current colonies with suitably tempered bees so that they can withstand me stealing some of their comb and brood. When I judge that a colony has begun to build up strongly, and a pollen flow has begun in the area, I can begin to make nucleii.

To build up the colonies I want to use I have to encourage them to make bees. To do this I use a process called ‘checker boarding’ when I add bars during the spring buildup. As the colony builds from its winter cluster the brood area of the nest begins to expand. To encourage this I add new bars between the existing bars in the nest area. This ‘one old, one new’ pattern forces the bees to build new comb and, crucially, encourages them to fill the comb with brood so that the nest doesn’t get segmented. I am usually able to start this around the end of April and, at the same time, take the first combs for a nuc colony.

The weakest part of a bee colony is the single point of failure represented by having only one queen. To counter this bees are able to create a new queen at any time they wish provided they have eggs in the colony that are less than 2-3 days old, the newer the better. So if a queen isn’t laying well, gets injured or dies, it can be replaced. Bee wranglers can use this talent to expand the number of colonies they have by creating a nucleus colony, also known as nuc, which is a mini version of a colony that grows to fill a new hive. In essence the aim is to create a mini colony knowing that some of the usual elements won’t be included. Flying bees are unlikely to be involved as they will fly back to the queen they know and, obviously, a queen won’t be there. So a few compromises have to be made to take account of this to ensure some success.

When choosing comb to use it is crucial to find comb with freshly laid eggs. When you hold up brood comb there should be some cells with very tiny white grains, like little grains of rice, sticking upright in the bottom centre of the cells; the smaller they are the fresher they are. Counter intuitively this will be most likely on comb with the oldest sealed cells where bees are just about to emerge. They will be surrounded by cells that have just hatched, cleaned out and propillised by nurse bees, and seeded by the queen who is desperately searching for cells to use as she is trying to lay up to 1000 eggs a day. Most of the bees on these combs will be non-flying nurse bees. The biggest danger to these eggs is dehydration which, because they are so small, can happen in minutes. So when you find a suitable comb slot it straight into you nuc box to get it out of the wind. From these eggs the bees will choose one to build into a queen cell. Always make sure you have not moved the queen accidentally as she may still be on this comb.

The next comb you are looking for is one with cells that have worker bees about to hatch. The nurse bees that you transfer now will become your flying bees over the next 2 weeks so the hatching ones will be your next generation of nurse bees. You need to find comb where most of the cells have a flatter wax seal, are darker brown and slightly crusty - you may be lucky and find a cluster of cells in the process of hatching. Again, slot that into your nuc box swiftly to keep as many nurse bees on the comb as possible. Once more, make sure you haven’t transferred the queen as well as she may also be on this comb.

The final component is stores to help the colony survive without bees to forage. You need to find a comb with, ideally, sealed honey or more likely stored pollen and nectar. When you’ve found one put that into you nuc box. The queen is unlikely to be on a stores comb provided it doesn’t contain any eggs or brood as well.

And that’s it. Easy peasy. We aren’t interested in flying bees so you can even have the nuc near your current hives without a problem. It takes 2 months for a new queen to be created, mated and get laying so if you get started now you should have viable colonies to house or pass on at the start of July.

So have a go. If you need a suitable nuc box let me know and I’ll make one for you. Making local queens from local well tempered colonies ensures the survival of bees that are ideal for this area and doesn’t risk introducing more diseases, parasites, etc.

Mike’s phone call caught me taking a car full of kids to the cinema, but I was able to offer to pick up the cardboard container of bees from him and foster them whilst they are waiting onward deployment. After getting everyone home, and supper, I set off to Sarah’s to collect a suitable 10 bar box that I’d left at hers. She is now custodian of a late split I made in June last year, that had survived the winter in the box, and it had been left at hers to allow stragglers to move out at the end of their transfer to her hive. Once home with the box it was dark and the transfer could begin.

I got everything I would need together next to the box. I found a broken piece of comb from an exercise earlier in the week (another post I think) and tied it onto a bar with garden string poked through the comb with a pencil. I found enough spare bars to cover the top of the box (another lesson learned the hard way), secateurs to cut away any hedge clippings that might be in the container, and a knife to open the container with. I set the garage light to stay on and off we went.

I set half the bars onto the box, including the one with the tied on piece of comb. The bees now had a dark area to settle into, with comb ready for the queen to start laying into straight away, that smelled of ‘bee’ - all ways to encourage the colony to decide that this would be their new home and make them less inclined to abscond. Then I opened the cardboard container to see what surprises Mike had passed on. There was very little vegetation in the container so I was able to tip the bees straight onto the box and let them begin to find their way inside. The benefit to doing this in the dark is that the bees are less inclined to fly as they can’t see. However the downside is that it makes it more difficult for me to see them when they do. At this point, as I was bending down to check on progress, I hadn’t noticed a bee caught in a fold of suit material on my leg which I then leant on and got a sting for my trouble - another lesson learnt. With the bulk of the bees now working their way into the box, and many signs of fanning that shows ‘this is home’, the long wait could begin. I opened up the other end of the container and tapped out the last stragglers onto the box and then went inside to find a good film and a cup of tea for an hour.

At a suitable point in the film I went back out to check on progress. The bees were mostly in the box or sheltering in a small cluster under the end of the bars. I fitted all but the last bar onto the box. I then scooped a handful of bees onto the top and waited whilst they made their way in. Once the last ones were in I fitted the last bar and cleared the tools away. I know that some bees will be sheltering under the hive as it has a screened bottom. When I move it into place in the morning I will remember to be suited up so that these loose bees won’t do any harm and can be moved safely with the box to their new location here for their fostering.

If you already have bees yourself please consider splitting them over the next few weeks so we can pass viable colonies on to others later in the year. You can always ask for help if you are not sure what to do and, with a little notice, I can build suitable boxes ready for you. If you have need of bees and don’t already have any to work with, please make sure you have added your details to the comments on the ‘Bees Wanted’ page with this years date.

Hi all
I'd just come back from my customary cappuccino and bacon cob ride , when my neighbour let me know that our bees were going mad in the back garden .
They had swarmed into the hedge between us , I phoned  Tim who would pick them up later for onward delivery.
So Set about how to get them into our box . They had managed to lodge themselves into the hawthorn hedge by the side of a black birds next ! 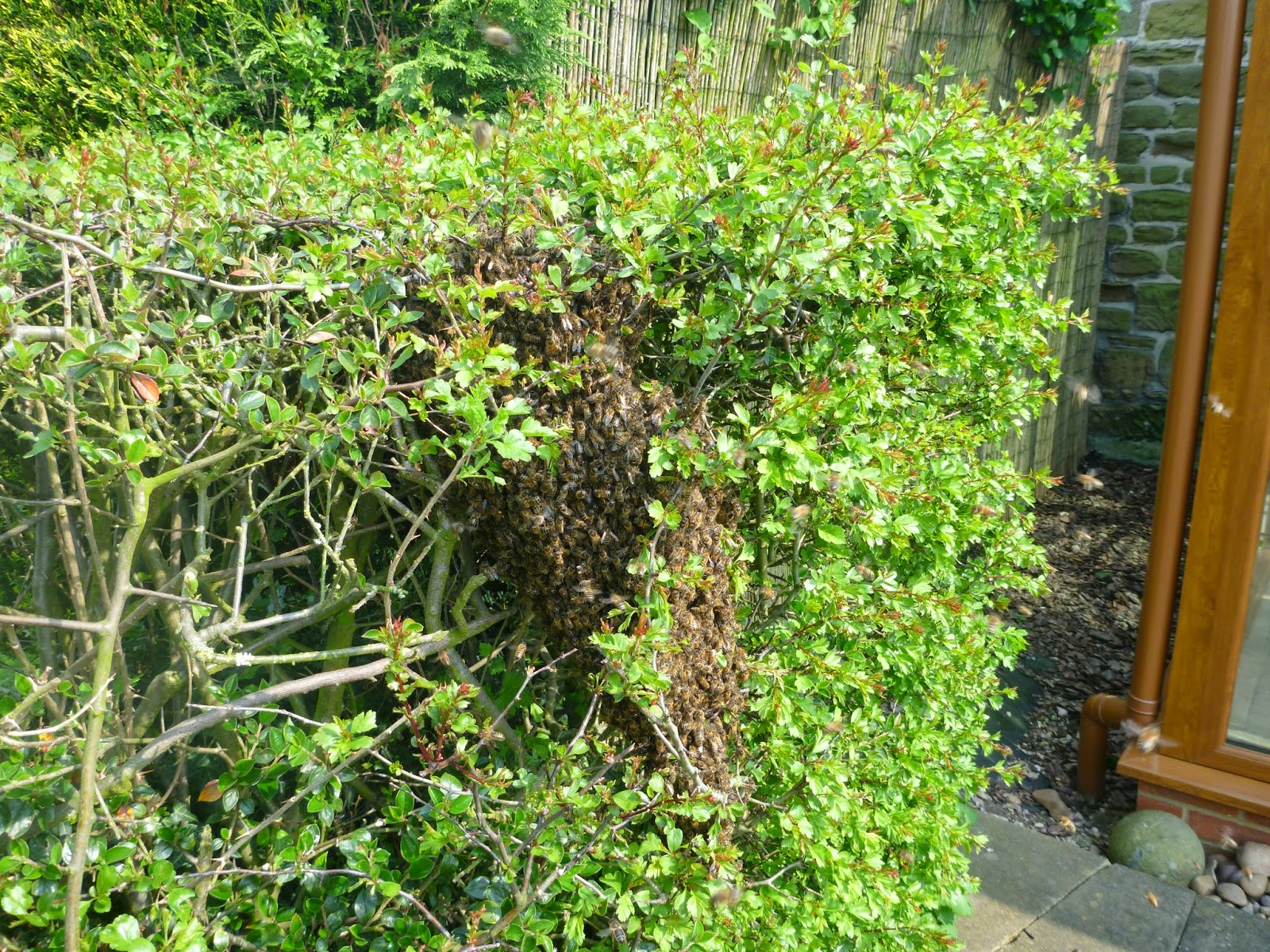 I managed to shake them into the box with a little pruning  and then set about getting the stragglers in with a goose feather and dustpan ! 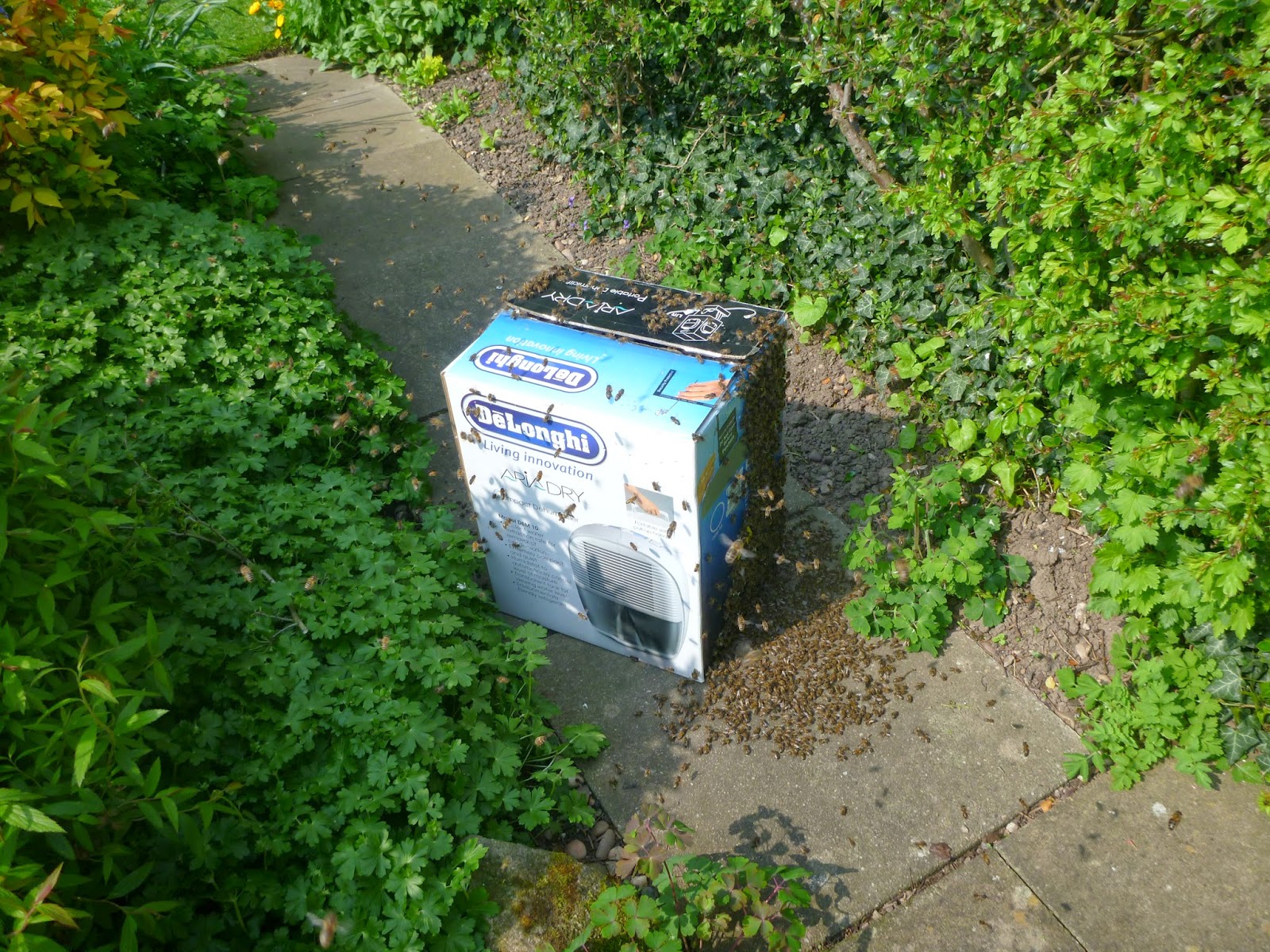 Tim has picked them up and it'll bee good for the recipient to continue the blog on the Weston Bees .
See you at the next meeting in May