Just back from a hard core bumble bee extraction. I’d already been to survey what was needed after a phone call on Tuesday evening and assumed (see the photos below) it was similar to the one I’d removed for Ali B earlier in the month. So armed with a suitable box and my protective gear I nipped over to Chaddesden. 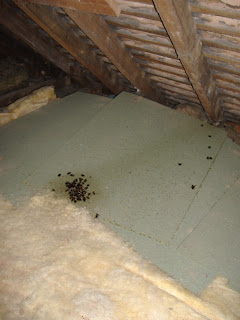 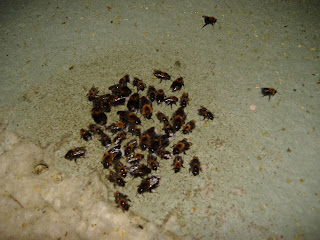 The very placid colony was located under the insulation in the loft and weren’t troubled by my initial investigations. After tentatively lifting and cutting the 6" thick fibreglass insulation I was confronted with a labyrinth of tunnels going in lots of directions. I kept carefully searching until I was confronted with a nest that was twice the size of the box I’d brought - Merde! The nest had the appearance of some strange confectionary, a bit like Rocky Road, in that the surface was covered in loads of 10mm wax balls (they act as brood chambers) and small, open, wax buckets of honey. In my haste I forgot to take any pictures but it certainly isn’t anything like honey bee comb. Another thing was the smell – a very over powering sickly, musky tang, that had my face not been right above it might have been bearable. By now the bees had gone from ‘Green Alert’ – “what’s on the TV tonight, Queenie?” to ‘Amber Alert’ – “pass me the axe I hear burglars!”. Needless to say there were a good number of bees in the air. Weirdly, even in this agitated state, they were still not very aggressive compared to honey bees and seemed content to circle noisily around the light bulb. Thinking on my feet I reverted to Plan B: find another box and something to use as a lid without climbing back down the ladder. Luckily the loft was a treasure trove of bags, boxes and bits of board, and I settled upon a medium sized stacker box topped off with some laminate floor underlay – tasteful. Now came the interesting bit; I slid my hands under as much of the nest as possible and lifted it gingerly into the bigger box. It really was like a very loose cake mix and needed several attempts to get it all in. The bees were still quite agitated but still only at Amber; maybe that’s as bad as it gets! Once I’d got as much of the nest as I could I topped it off with several pieces of the holey insulation and the make-shift lid, leaving a small gap for the bees to get in. As the householders will now be on holiday for a week we decided to leave the box in situ and I will collect it, with as many attendant bees as possible, when they return. That will give me time to make a more suitable box and, more importantly, find a location to keep them – there is an embargo on any more bumble bees in my garden. Hopefully the final move will be less traumatic; I’ll let you know!