Bees in a pickle

Part 1 (Branston Swarm)
On Tuesday evening I got a call from Steve in Branston (hence the weak pun above) saying that he had a swarm of bees in his garden. I called over at about 19:30 to find the swarm clustered around the main stem of a small holly bush. Not being able to shake them into the waiting box I decided, after some deft topiary, to put the open bottomed box directly above them; as soon as it was in position they immediately started to move up into it. I said I would return to collect them the following evening.*

On the drive to Branston the following evening the weather had taken a turn for the worse, with light rain in Derby and what looked to have been a very heavy down pour in Branston. The rain may well have helped the situation as upon arrival I was delighted to find the swarm tightly balled up inside against the waxed bars that constituted the roof. Thankfully I had taken the precaution of securing the box within the branches of the holly as the now top heavy box was listing a far bit. The box then went straight into the trusty old duvet cover and into the back of the car - took about ten minutes in total. A quick call to Pete let him know we were on our way, and half an hour later the bees touch down in Belper.

Many thanks to Steve and his family for their support and patience in helping us 're-house' another colony of bees.

* as soon as I got back home I got another call regarding honey bees. Went over to a house in Chaddesden who, as it turned out, had a bumble bee nest in their loft. Going to retrieve next weekend -  see Bumble Bee Rescue IV

Part 2 (Now Belper Bees)
Boyd arrived as promised latish-on yesterday evening bearing a duvet wrapped box full of bees. Hopefully the transfer would be straightforward - a "lift & shift" of a few bars directly from the transporter box to our TBH. We'd already had a discussion over the phone about the length of the bars and the inside measurement of the hive - should be no problems. 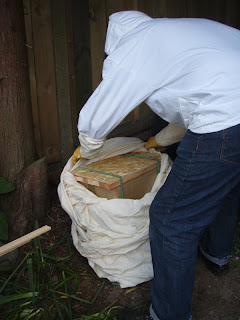 Well, guess what... there were no problems! The bars moved easily from the transport box to the hive with significant number of bees still attached..... 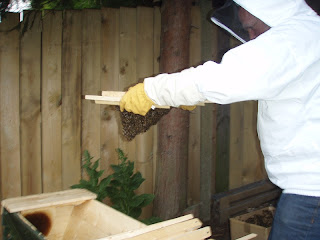 .... and they fitted pretty well into the TBH albeit a little thicker than those already in the hive. 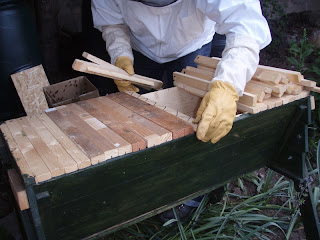 We did wonder, though, whether the queen had been in the main body or whether she was still in the cardboard box. Looking inside it wasn't obvious, there didn't seem to be too many stranded but lifting one of the flaps revealed a second large cluster of bees. 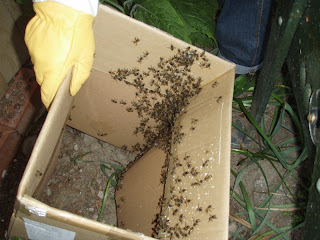 Boyd decided to shake and shock the remainder into the hive. Most went in with only a few stragglers remaining..... 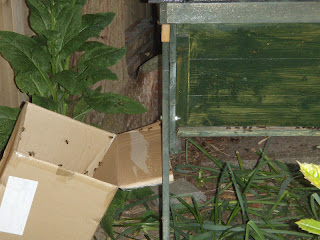 ..... who slowly decided to follow the rest into their new home.

So let's hope they're still there and decide to stay!

(Edit Note: Pictures make it look like I did all the work but Pete was very 'hands-on')
Posted by PeterT at 06:51