Considering I don't have any bees of my own I seem to be more involved with them than ever. Several weeks ago I had been contact by Steve in Loughborough asking if I'd left for Qatar yet as he had some bees he wanted a hand with.

﻿﻿﻿﻿﻿﻿﻿﻿﻿﻿He had built two bait hives, primed them with pheromone attractant, and left them at the bottom of his garden; one up a tree and the other on the shed roof. Much to his surprise he caught a swarm in each and was not entirely sure what to do with them. The situation was slightly exaggerated by him having to work abroad for several weeks and had no idea what they had been up to. 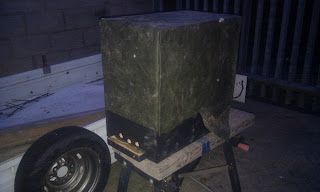 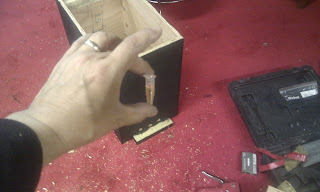 On his return last week I called over and we decided to take the box down from the tree and see what was inside. Rather than describe the whole process (and hence the time of this blog) I will use some of the many pictures that Steve, and his son Ben, took of the procedure: 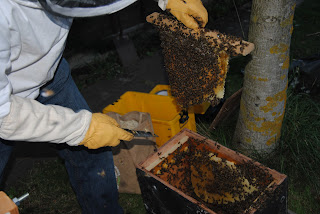 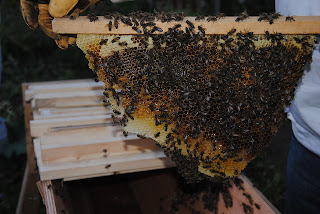 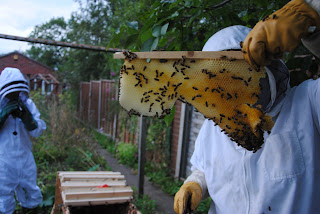 Obviously far more bees than both of us had expected; the box was absolutely packed with comb and bees in every stage of their development. Stupidly, and I'll hopefully take it on the chin(s) as a learning experience, I had neglected to accustomise the bees to their new location (about a 100ft. from the tree) and the flying bees promptly flew back to the tree. This meant that over the next few days Steve had to reposition the box in the tree to capture and re-locate the flying bees - sorry!: 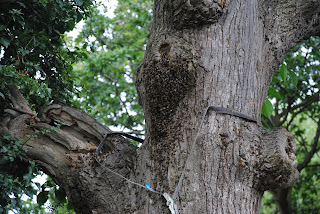 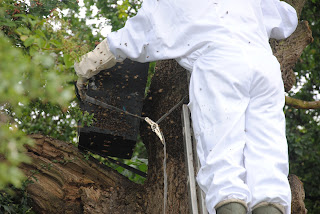 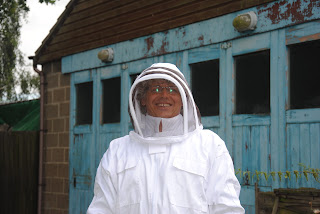 After re-positioning the bait box under the hive, and restricting their access to and from it by putting grass in the entrance, the flying bees seem to have got the idea that the TBH is their new home: 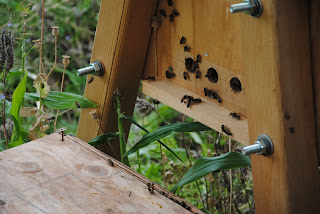 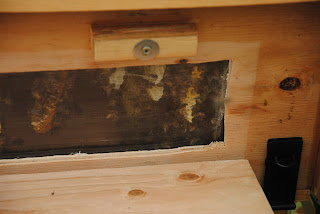 ﻿
﻿
﻿
So now hopefully they will get some good weather over the next few weeks and build up their reserves to a point where they can survive the winter. The intention is to leave the other bait box alone until next year and then transfer them to another TBH. Steve is intending to come along to the next meeting in September so he can give us an update then.