In their excitement (at the prospect of the Wimbledon Final obviously) my bees decided to swarm yesterday, the children ran in to tell me that they were 'going mad' & it truly was an impressive site, the whole of the back end of the garden filled with buzzing bees covering a huge area. They eventually settled in the old apple tree & since I've never dealt with a swarm before & the prospect of having to knock them into the box off quite a solid branch while up a ladder, I then called for help.

Thanks so much to Tim & Mike for responding so quickly. As I shot up to the Co-Op for a larger box than we had, Tim arrived & just as he & Iain walked to the end of the garden, the bees just upped & left in the direction of Thulston!

I think the temperatures were so hot yesterday, an hour in the tree was all they could manage. Gutted to lose them by a matter of minutes, but will know to be quicker next time! 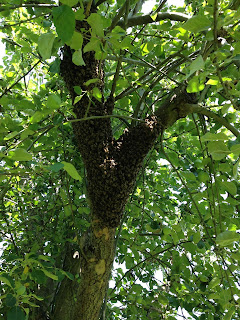 Plenty of activity still in & around my hive, so will keep my eyes out in case of a double whammy, as Mike & Monique have experienced!