After a few false starts I finally managed to meet up with one of Qatars few beekeepers and get my hands on some bees. I had seen a listing in the archive of the Qatar Natural History Group about a talk given by a local beekeeper some time before I arrived here. It gave his contact details and a few e-mails later I was kindly invited to a farm just outside Doha to see his small apiary.

Khalid Al-Suwaidi has been keeping bees for the last twelve years in an environment that is totally the reverse of that of the UK. In the Summer, when it's blisteringly hot, everything shuts down, and in the Winter, when it's Spring like and wetter, most things come to life. It is now just coming to the end of the beekeeping season which sees the disappearance of nearly all tender flowering flowers, shrubs and trees, and when standing water is at a premium. There were about twenty hives in three different locations around the farm, mostly with six frames in the brood chamber and six in the Super. Most of the hives seemed busy with lots of very placid bees to be seen. None of the frames we looked at were excessively full of honey but there seemed to be plenty being processed and lots of pollen. I took plenty of pictures! Because there is so little interest in beekeeping in Qatar all of his National hives and equipment, as well as the bees, were imported from Egypt. There is a lot of Arabic honey for sale in the supermarkets but none at all from Qatar. Khalid sells his honey from home as there is not enough to warrant his own shop. There don't seem to be many diseases (Varroa can't tolerate the heat apparently) or many predators (no wasps but lots of ants, and no ground base animals such as bears or badgers). The main problem is comb collapse due to the heat and a very colourful bird called a Bee Eater - can you guess what its main diet is? When we were talking about this bird, from the description, I thought Khalid meant a Woodpecker but checking in my Qatar bird book it was immediately obvious what he meant. Apparently they eat thousands of bees daily and have a very effective way of avoiding being stung - certainly different! Very generously Khalid gave me a selection of the produce from the farm - peppers, french beans, tomatoes, bottle gourds; much of which must have been pollinated by his bees. 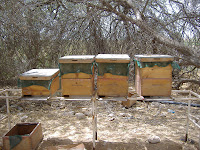 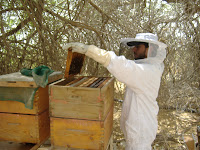 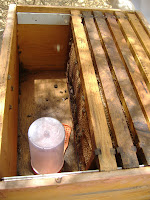 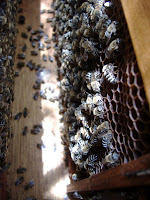 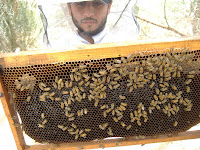 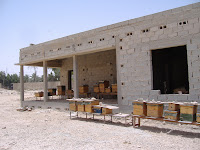 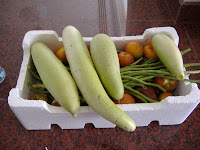 As the weather cools down later in the year I might approach Khalid to see if I could catch a few swarms and keep them in some Warre hives. I intend to approach a local college to see if I can utilise their facilities to build the hives over the next few months. As I don't have access to any private outside space I intend to look locally for a place to keep the hives. I have heard that there is a gardening club in Doha that has something similar to allotments in the UK and they might be a good place to start.

Hope all is well back in the UK and Good Luck for the coming season.