Or perhaps that should be, "Sugar coated bees, anyone?"

So the original swarm was failing, there didn't seem to be a queen, a number of capped drone cells and the workers were slowly dying off. We'd had a lengthy discussion at the last meeting as to the best way forward which resulted in Boyd taking a look at the hive (and confirming the decline in numbers and lack of queen) and Tim very very kindly offering to supply another batch.

As there were still some bees from the old colony Boyd decided that the best way forward was to try and integrate the newcomers with the old by coating them in icing sugar. The theory being, if I understood it correctly, was that by doing so the bees own hive smells would be masked by the sugar and with mutual grooming the original bees would be subsumed into the new. We'll see ....

So today Boyd collected the new nuc from Tim and arrived early afternoon to transfer them into the TBH.

First thing then was to coat the old bees in icing sugar. Fine. 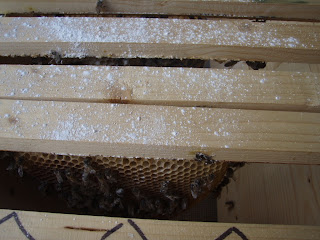 Then coat the newcomers with sugar too. Also fine. In fact everything went fine. 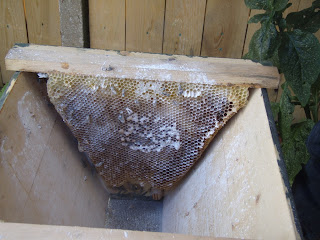 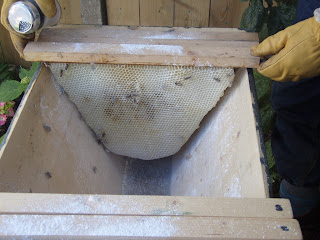 And then reassemble with the old combs (a bit like a Haynes manual). 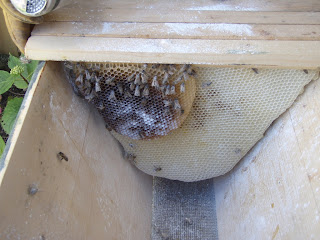 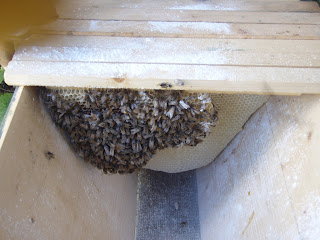 Making sure that there was plenty of sugar on everything. 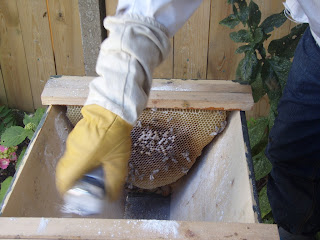 There were quite a lot of confused bees buzzing around whilst all this was going on but they were surprisingly good natured. Once the lid went back on it didn't take long for them to enter the hive and then start their orientation flights. At the time of writing this they seem to have settled in ok and appear to be foraging (but I don't know if they're the old bees or the new ones!).

We couldn't spot a queen on the new combs but there were at least four capped queen cells so I'll take a peek early next week to see if they've hatched and try and spot a laying queen. Let's hope this second wave will survive!

So, many, many thanks to Tim and Boyd for helping me out, I owe you both a pint or two (at least).