Boyd arrived with a box of bees for our hive and transfered them in using the shock technique ! 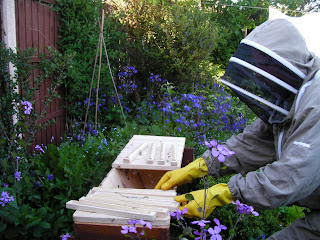 Mike thought that was very brave of Monique to get the suit so made sure she was close enough to get a photo or two !

The Bees have now settled down and are purposefully flying over to the field beside us to make the most of what is left of the oil seed rape flowers , - we are finding them on the clover in our grass and on flowers around the garden . We have noticed that they are now comming back with pollen so hopefully this is a good sign .

We really have to say a huge thankyou to Boyd for his patenince , telephone support and enthusiasm.

Mike and Monique
Posted by Mikmon at 17:36