On Friday evening I was supposed to move another swarm from Dave's bait hive in Moira to Pete's TBH in Belper, but the bees had other plans. They re-swarmed from the bait hive into one of Dave's nearby TBHs and, as they had made the decision unaided, we decided to leave them there. Pete was obviously disappointed but philosophical about the chain of events and is still first on the list for the next swarm.

The evening was not entirely without bee activity as I'd received a call earlier in the day, from Steve and Valerie in Aston-on-Trent, regarding a small colony of bees that had taken up residence in a bird box. Their young dog had taken to eating any bees that came into his range and was stung in the mouth so thought it advisable to move them elsewhere. They were unsure whether they were honey or bumble bees, but from their description and the bird box location, I was almost certain that they were the latter. Being only ten minutes drive away I left the collection until till fairly late in order get as many of them as possible. The box itself was fixed about ten feet up on the trunk of a large tree but was easily accessed via the waiting ladder. In the fading light we waited for as many stragglers as possible to return and discussed the varied activities of the now confirmed bumble bees. Not being an expert of bumble bees I could only confirm that they were not Common Carders and the colony seemed to consist of several different types and sizes of bumble bee; ranging from large banded ones to small almost honey bee types. There was a lot of jockeying to go in and out of the box with several large ones seeming to hover around the entrance unsure whether to go in or not. I wondered if this was some sort of bumble bee boarding house where any stray/single bees could stop for the night. I suspect though that this is just me overlaying our experiences onto theirs and that they are all the same type just doing what bumble bees do before tucking-up for the night. Anyway, deciding we had all the bees we were going to get, I plugged the hole with sponge and twisted the box off its single fixing screw and tied it inside the waiting pillowcase. 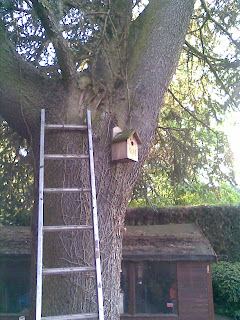 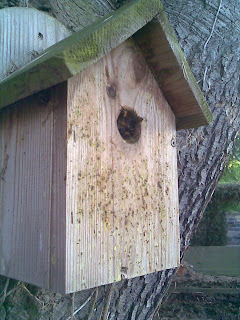 After farewells it was a quick trip back home and a simple one screw fix on to another fence post in my garden. Throughout the bees were very calm and never once seemed over excited even when I was very close to the box entrance. I don't know if my small bee enclosure is reaching it maximum bee density, with three bumble bee boxes and two TBHs in fairly close proximity, but I'll keep a close eye on things and report back if hostilities should break out.
﻿
Posted by Boyd Brooks at 06:27