All seems ok despite the heavy rain nearly everyday since they moved home. The first couple of days the bees stayed very close to the hive, mostly just crawling around on the sides and have progressed to flying further and further since then. They don't emerge until 1030-1100 ish and are back in by 1500ish weather permitting, but at least they are going off to do their stuff and returning. They don't seem to be foraging in the garden but instead take off, get lots of height and are off over the houses. Another week of rain forcast, but hopefully they will  stick it out and cary on doing what they're doing! 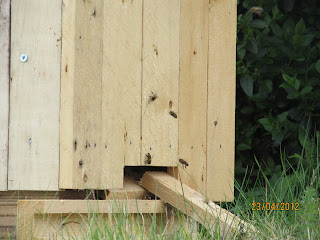